I hate spammer and scammers. But sometimes I’m actually impressed with their ingenuity… and I imagine the clever ones must be doing quite well for themselves. I think it is a good idea to examine the ever-changing tactics of these digital hucksters occasionally, so we can be aware of what is out there and don’t get scammed ourselves.

This morning I recieved a direct message from one of my friends on Twitter. The message simply said “If you’re looking for a extra job try…” and there was a link. I clicked the link to see where it would take me. The resulting page was a local USA Times Daily job report with an article about a woman (Kelly Richards) from my local area and how she was using her computer to work from home, spend more time with her kids, etc. It went on to detail how she was tired of “get rich quick” schemes, and at the bottom of the article were comments by other people either asking questions about the plan or people who had done the plan and were commenting on their success.

The reality? It’s a scam. And a pretty good one. Maybe they’re selling something, and maybe they’re simply data-mining, (more likely) but it’s all false advertising. Here are the things I discovered when I looked closer. I also discovered that this particular scam started back in December 2010 with the original website domain of CNBC7 that was first registered in China about a week earlier. I guess people figured that one out and now they’ve rebranded it to say “USA Times Daily” – although the content is exactly the same. (Click here or on the image of the job report to see it larger) 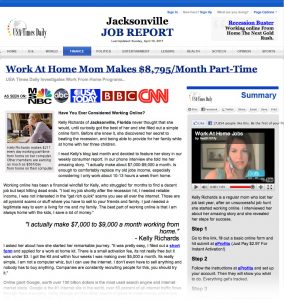 My friend send me a direct message. I’d better look at it.

Truth: My friend hadn’t used her Twitter account since 2009 before this post. Often spammers and hackers will hack into abandoned social networking accounts to get access to real email addresses or sensitive information. In this case they took it one step further, and after they hacked her account they sent direct messages to everyone she follows. A direct message through Twitter can only happen if you are also following the person who follows you. So it seems legitimate and you click the link.

This is a local article about a woman who lives in my city.

Truth: The “USA Times Daily Job Report” is a fake site. When the hacker accessed my friend’s Twitter account they could see who she was following and also see what city she lived in. They took this information and created a dynamic page that would show every visitor their home city’s name in the title of the report as well as in the body of the article. So, while I would read “Jacksonville Job Report”, my friend in Chicago would see “Chicago Job Report” and so on. Very smart.

When you read the article, it does a good job addressing the fears you might have about such a program. Kelly talks about how she was skeptical, but took a chance and it paid off. She talks about how she can provide for her family now and how legitimate this job turned out to be. The article generates even more credibility with a photo of Kelly at the keyboard (stock photography) and a photo of a “real check” that Kelly received. Plus “Kelly” was being “interviewed” by “USA Times Daily” – they claimed to do weekly consumer reports and picked her for this week. The entire article is well crafted.

But you can be guaranteed that Kelly and her checks don’t actually exist.

The article sounds pretty good and addresses all of my fears about online jobs. I also see CNN, ABC, USA Today, BBC, and MSNBC affiliate logos on the site. It’s a full website with lots of sections, news videos, and a login. That’s a lot of trouble for someone to build an entire website for  a scam.

Truth: They didn’t build an entire website. Every single link from their entire navigation, to all the logos, to the login area, etc. funnels you to their “eprofits” selling page where they ask for your information to push you into the next step. Even the ads and the links to the “commenters” take you to this selling page. The attention to detail was very good on this site. There are related news articles, local weather, and buttons for social media. But, again, all fake. The buttons, articles, and links won’t take you anywhere.

But, there are lots of people who commented on the article. Some were people who actually have done the program.

Truth: When you read the comments, you’ll see that they are also crafted to give you more information about this product and dispel more of your fears. They are all fake comments. If you try to post your own comment it won’t let you. It tells you your comment is being held for moderation and will post after approval. If you watch closely, you will see that when you submit your comment, you are actually giving a hit to StumbleUpon. StumbleUpon is a service that can give ranking to links. So, even if you figure out this is a scam, you have unknowingly given their fake site a “thumbs up” generating even more traffic.

Brilliant. It’s a going-to-hell kind of crappy. But brilliant.

So, be careful in your internet travels, be aware, and don’t fall for it! If you aren’t sure about something, feel free to ask me and I’ll give you my opinion!